Have you ever shopped at a fair-trade, ethical kind of shop or company and ended up buying stuff more because of the goodness of the cause than because you actually really liked the stuff?  I sometimes do the same overseas. Buy something because I love the story behind it, then get it home and think, ‘what was I thinking’ and never wear or use the item again. Now clearly there are worse motives for buying something, but I have just had a very different experience in Bangkok.

Chris and Jodie McCartney are an Aussie couple who live in the biggest slum in Bangkok with their three gorgeous blond daughters.  They’re part of UNOH (Urban Neighbours of Hope) – and you can find out more about them from my recent video diaries.  Jodie is a self-confessed op-shop fanatic (op-shop = opportunity shop = what Aussies call charity shops) and after she and the family had been living in the slums of Bangkok for a while she hit upon a way to bring the joy of the op-shop to the locals.

There are heaps of ex-pats in Bangkok, Westerners on assignment to the city who accumulate lots of stuff while they’re there and don’t want to ship it all on to the next place.  So an amazing amount of high quality gear (clothes, furniture, appliances) gets left behind.  And here Jodie saw her opportunity, and Second Chance Bangkok was born.

Not only does it help reduce the piles of refuse in the landfill, it also gives a boost to many people who make the local slum in Klong Toey their home.  There is work to be had.  Enterprisings locals often queue up in the mornings to bag a bargain and sell the best stuff on again elsewhere. The profits support community projects and help start other small businesses.

I have to be honest that I didn’t buy anything from the main shop when I was there.  It was in the midst of a huge sort out and looked like a bomb had hit it.  But, I snagged a brilliant bargain from another wing of the business. They up-cycle!

I met a beautiful girl who is the single mother of five daughters (whose names all begins with B – the very cute baby is BunBun!) and who was working in a garment factory, barely surviving.  Second Chance Bangkok have started her out in her own sewing business – she’s really gifted – and she’s now designing and making her own clothing which they also sell.

And my purchase, which I am as excited about in the cold light of London as I was in the muggy smog of Bangkok, is this fab bag, up-cycled from a bare of jeans and lined with a man’s dress-shirt. I’m holding out for the day they start selling on-line.  Until then, you’ll just have to envy my fab bag. (Or make one?) 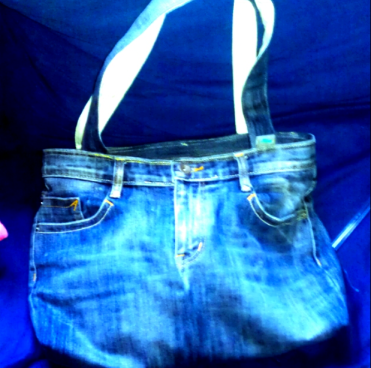 I have recently joined twitter.  I also joined linkedin (apologies to everyone who got the mass email invite) but I don’t really understand the point of it yet.  My boss at Tearfund asked me if I was tweeting about work, or The Ruby Dolls, or what.  Which is a question I asked myself before I started.  And it turns out the answer is YES.

I spent the first six years at Tearfund feeling like a fish out of water.  Flailing around wildly (on the inside).  And just in the last year or so I’ve reached a place where I’ve seen more connections between the disparate parts of my life.  The theatre-making.  The travelling.  The community-building.  The Jesus-following.  The fighting-poverty-and-injustice.  And while it might be easier to find my place in the twitter sphere (and, in fact, in the world) if I were only to blog about (or work for a living in) development, or churchey stuff, or theatre, I think I’d be less of myself.

So here’s to a life that doesn’t fit into categories.  And some current highlights:

Our mate Ash Barker is about to arrive for a visit!  He and his wife and kids live in the biggest slum in Bangkok and have done for about a decade.  Ash has written a book recently called Slum Life Rising: How to Enflesh Hope within a New Urban World, telling some of their story.  He recently finished a PhD on Christian ministry in slums.  For the first time in history most of us live in city, with 1/6 living in slums.  It raises huge questions for those of us who want to help bring transformation to the unjust structures of the world and see people released from poverty.

One of my favourite stories of those is about a woman called Poo.  She is part of their slum community in Klong Toey, and Ash’s team helped her to set up a cookery business, now recommended by trip advisor and many other sites.  She even has a book, with the same name as the business: Cooking with Poo!  Some of the story is on the website.  I am SO EXCITED because we’re off to visit them in Bangkok soon (will come back with a film, I promise) and I’m going to learn to cook with Poo. Brilliant.

In other news, our theatre company are back in the saddle again and we spent an exhausting weekend revisiting the stories of our ancestors in anticipation of our previews at Riverside Studios next month and then our run at the Edinburgh Festival.  One of the other Ruby Dolls has blogged an update on our last few hectic months.  It feels like we’ve been developing these stories forever, but the exciting thing is that we’re finally getting them out to the audience they deserve.  Because they’re great.  Come and see!

And one more thing.  I’ve just posted another little video I made in Argentina a few months ago.  Enjoy.

Juan Jose and church in Buenos Aires from Integral Mission on Vimeo.

what I am thinking about….

Jenny from the Block

The Tongues of Men

a Practical Theologian Hungry for the New City