In the midst of festival mania, yesterday I went and heard Tony Benn speak.   There’s a film being made about his life and they were previewing some of it and then Mark Thomas was interviewing him. (The film is excellent and I hereby recommend it).

So I joined hundreds of radical lefties (bringing down the average age) to go listen.

Amongst all the more straightforward lefty political questions, a lady stood up and talked about the fringe.  She said she was increasingly frustrated by the enslavement of artists at the festival (referring I think to the fact that artists don’t make any kind of money up here, and in fact usually end up paying for the privilege of performing), and how all the money is instead going to the landlords of Edinburgh (who hike up rents in August to mind-boggling levels) and, presumably, some of the big producing companies.  She then asked a very generic question – “So what gives you hope?”. 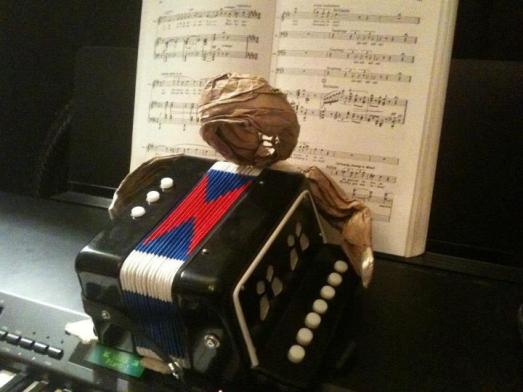 This is our little paper man, Chaim, from our show. He has had to take up busking to survive financially.

I reckon it’s easier to answer that question than to speak into the complexities of the Edinburgh Fringe economy.  I find it easier, anyway. Tony Benn talked about having spent a lifetime working for change and then having seen some things change, and so that makes him think they can.  But what would he have said about the fringe?

Today, as I was flyering and trying to persuade the public to come and see our show, I met a couple who had seen The Ruby Dolls yesterday.  They loved the show, but wanted to know, as festival virgins, what bringing a show here achieved – what are we hoping will happen?

I was on the spot.  (Do I mention wild fantasies of being handpicked for stardom?). No Ruby Dolls were at hand to rescue me.

It all makes me ponder what the point of being here is, one show in 2695, especially given the ridiculous money involved that rarely comes back to you. My answer to the lovely couple was about reaching a big new audience with your show and getting press attention all of which will open doors for future work and tours and the like.

But why is it so flipping hard to make art work economically? Answers on a postcard please.

On the one hand, I look at lots of actor friends who struggle and work hard and have their sense of self-worth eroded year after year by crappy jobs and lack of progress and instability.  And I want to shout ‘ENOUGH!’ Why do something that makes everyone so miserable?

And at the same time, I believe passionately that art and creativity are crucial, at the very core of who we are.  Wonderful art enlarges us all, takes us places nothing else can, makes news ways of living and thinking possible.  I don’t want people to give up.  I don’t want to give up (most days).

So the only answer I have at the moment is to engage our imaginations and creativity in finding ways to make it work that are weird and wonderful and unlikely – involving combining different kinds of work and ways of living.  (Hence I shall continue to search out people who do this and write about them in my blog). Like this bloke said:

Performing at the Edinburgh Fringe can be experienced in many different ways.  This is my third time.  It can be a bit of a laugh (usually if you’re young and unburdened by budgets); a glorious cultural adventure; a masochistic, tortuous endurance test; or simply a tiring alternative to burning a few thousand pounds. But I think that in many cases it involves courage.

I went to hear a singer a couple of nights ago called Camille O’Sullivan and I was gobsmacked.

The show wasn’t perfect from end to end but there were moments of totally transcendental beauty as she told stories through songs, and something in me hasn’t been able to forget it.

She has an interesting story.  The Telegraph profiled her recently (apparently I am turning into my parents and sourcing all current information from The Telegraph. This is partly because they just gave our own show 4*s and so I like them).  She used to be an architect, but then following a serious car crash in which she nearly died, she decided to do what she really wanted.  Which was to sing.

She had been “afraid of criticism, afraid of the audience, afraid of putting myself out there, but life is for living, and if you’re scared of something, maybe you should head towards it, because it might be what you need to shake you into being alive.”

I seem to be attracting reflections on courage right now.  A few blogs I follow have been themed in that way.  And frankly the whole experience of being at the Fringe makes me think about it even more.

When you get rubbish reviews or have small audiences and yet 3 weeks stretch ahead of you in which you will keep putting your show in front of people, it is a test of courage.  Yesterday I saw a show called A Soldier’s Song in which a man recounts the true story of his time fighting in the Falklands.  I went because war horrifies me and yet my brother fights in one, and my dad and grandfather before him. It’s a brutal, angry account of war, but what hit hardest are the moments he reflects on the shame he feels coming to terms with what he has been part of.  The man is not a professional actor by trade; he is a writer.  But his courage in standing on a bare set every night, recounting his tale and confessing his fears and doubts, strikes me as one of the more courageous outings at the Fringe.

Doing something for a one off isn’t too scary.  I went to a comedy show the other night and I was late, and the ushers told me that the only way latecomers were admitted was if you walked in, and declared to everybody (including the comedienne), very loudly “Darling, your show was so marvellous last night, I just had to come back.”  And I did it.  1o seconds of embarrassment don’t frighten me.  But continuing to dare to put something personal and hard-fought-for in front of an audience every night for 26 nights…that takes more.  I don’t mean just going through the motions, but continuing to put your heart and soul into something. Because there’s the risk that nothing comes back, or, worse, your offering is rejected, discredited.

Am I a courageous person? It feels like it’s taking courage to be here and do this, to join so actively in the conversation (even though the biggest risk of all is getting totally lost in the scale of this festival, so no-one actually hears you…).  But when I think about the future, I think I have a large capacity to be a scaredy-cat.  Maybe the trick is not to think so far ahead.  Camille said in her recent interview:

“I’m not saying every day is a joy. Sometimes I feel like I’m losing my mind, but then I remember everything is a choice, and this is my choice.”

Here’s to small, brave choices.  And for a treat, here’s Camille singing:

what I am thinking about….

Jenny from the Block

The Tongues of Men

a Practical Theologian Hungry for the New City